The Wound Behind the Wound

When I was ten years old, I spent three weeks in the hospital with a serious staph infection. I was put on high doses of antibiotics for several weeks and fully recovered, except that I developed psoriasis for the first time not long after. I have been fortunate in that my psoriasis has never been significant, and at worst has been irritating. Some spots have lasted years, while at other times they go away quickly. It can be completely gone for years, only to arrive again seemingly out of nowhere. Over the counter or prescription ointments have helped somewhat, but in most cases not significantly. Dietary changes have resulted in full remission for significant periods of time, but at other times it has had little effect. There seems to be varying causes of flare-ups, including both physical and emotional triggers. In recent years I have had a couple of stubborn spots on my left knee and left ankle. I decided to try and heal myself in my next lucid dream. As it turns out, it wasn’t quite that simple.

In my first lucid psoriasis healing attempt, I saw the veins in my hands glowing with green light, with the trees around me glowing with the same green light. My fingertips were particularly bright, and I touched my knee and ankle with them. I held my hands there for a few seconds and then noticed that the psoriasis spots had turned black. I spoke directly to the dream asking if I am now healed. I heard a telepathic response saying that I am healed, but that it will take some time before I see it. I woke up curious about why the healing would not be visible until some time in the future, and exactly who or what part of me made that decision.

Fast forward four years. The psoriasis on my knee cleared up, but the ankle became somewhat worse. I tried a series of a few more lucid healing dreams. When lucid in the first of these dreams, I touched the top of a pine tree with the palm of my hand and then awoke into another scene in which I was in a bed looking at my hands. My hands looked normal, except that there was an extra set of child-sized hands protruding from my wrists next to my regular hands. I tried to speak my intention to heal myself, but I had extreme difficulty speaking. I didn’t see any healing light and woke up feeling frustrated.

In the next of these dreams I still had difficulty speaking, but I could quietly speak my intention. I looked at my hands to see if any glowing light was coming out of them. I didn’t see any light, but there was gray mist or smoke coming out of my fingertips. I woke up feeling like I had at least made some progress. In the third dream in this series, I could clearly speak my intention, but woke up immediately after speaking the words.

In yet a fourth lucid dream in this series, I was aware of the difficulties that I have had both in healing my psoriasis and in speaking my intent. I noticed a feeling of congestion in my throat and the scene changed. I was then floating around near the tops of some pine trees and saw a colorful ball of light appear next to me. It spoke to me, saying that I have done the physical things needed to heal myself, but that I must heal the emotional wound. I was able to see the connection between my difficulty in communicating with the physical manifestation of psoriasis.

In my most recent lucid healing dreams, I chose not to specifically try to heal my psoriasis, but rather to ask the dream to tell me what it is that I most need to heal. I have gotten some interesting and unexpected responses, including a dream in which several dream characters told me that I need a dog. I have noticed that my ability to communicate in dreams has greatly improved, with the manifestation of that in the waking world coming along at a slower pace, and the psoriasis on my ankle has suddenly improved significantly in a short period of time.

Among my takeaways from this lengthy lucid healing experiment is that my psoriasis appears on my skin as a symptom of something else, and that it has done little good to try and heal my skin without going to the deeper underlying issue. Those deeper issues have included a need for a change in diet, managing stress, overcoming negative habits, or healing emotional wounds. When I can see the psoriasis as a method by which my subconscious (or perhaps my larger awareness?) is trying to communicate something to me, rather than as a problem that needs fixing, I have the opportunity to heal much more than my skin. 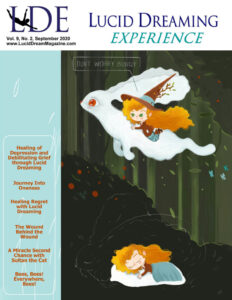